Hi all. Just interested in a regional survey. Trying to find out which bookmakers are closing due to new slots rules.Any help with any info would be helpful Also interested in any current bookmakers staff. And your views on this issue. Thanks

William Hill said on Thursday that it could close 700 high-street shops, putting 4,500 jobs under threat.

The Ladbrokes owner, GVC, has already said 900 shops could close, threatening 5,000 staff, while Betfred has predicted up to 500 closures, which would reduce its headcount by 2,500.

The combined total of 2,100 shops represents 25% of the UK’s 8,423 bricks-and-mortar bookmakers, potentially affecting up to 12,500 staff, or nearly 12% of people employed in the UK gambling industry.


“The closures shouldn’t only be blamed on stake changes though – that would be too simplistic.

“There has been consolidation within the industry and a drive from the bookmakers themselves to less costly online gambling for some time now and mass closures were predicted in the industry-funded KPMG report, even without stake reductions.”

Industry statistics indicate that gambling firms’ high-street betting empires were in decline before the stake cut, as more and more punters switch to online gambling brands, often owned by the same businesses.

Income from racecourse and bookmaker betting fell from £3.3bn in April 2015 to £3.2bn in September 2018, according to regulator the Gambling Commission. During the same period, online betting income jumped from £4.2bn to £5.6bn.

A survey by YouGov indicates that online gambling is now more popular, with 13% of people admitting to placing a bet on the internet in the past year, compared to 11% at an event or in a bookmaker’s shop.

While GVC, William Hill and Betfred have all said they expect shop closures and job losses as a result of the FOBT restrictions, Paddy Power Betfair, which recently changed its name to Flutter Entertainment, has said it expects to see no impact.

Tom Blenkinsop, operations director at the betting shop workers union, Community, called on William Hill to do everything it could to minimise redundancies and find alternatives where possible.

“The government also has a role to play and must look at what support they can offer to workers whose jobs are threatened as a consequence of changes to the law around FOBTs,” he said.

“Betting shops provide an important source of local employment and many of our members have served the company loyally for years. Workers don’t deserve to be the victims of the changes happening in the industry as a result of either government policy or the significant shift towards online gambling.”

Blabbmiester said:
Hi all. Just interested in a regional survey. Trying to find out which bookmakers are closing due to new slots rules.Any help with any info would be helpful Also interested in any current bookmakers staff. And your views on this issue. Thanks
Click to expand...

Welcome Blabbmiester...There are many changes now in the industry that are affecting the gaming sector overall. Not just in the UK.

Good to see you on BMR!! We have all of your up to the minute gaming information here..

Grateful. For the welcome. And to you Tart. for your piece. I am looking for name of shops. Towns. And counties please we are to do an indepth survey and give to the government. Loss of jobs. Highlighted in worst affected number of shops in certain areas that we can be certain of. We have contacted the big 4.asking for the shops affected. Guess what no response. Come all you shop employees shed some light. And please tell us your views and how much your betting company is helping you relocate or not. We have on first hand evedience. That in some cases staff are only giving one weeks notice... So punters alike find out from your betting shops. Any closures nearby. Thank you blabbmiester

t least 1,600 betting shops face closure after William Hill said it would slash its store estate by a third, with the jobs of close to 10,000 people at risk.

The bookmaker said on Thursday it would shut about 700 betting shops across the UK, putting 4,500 jobs at risk in a "devastating" blow to workers.

GVC, the owner of Ladbrokes and Coral, plans to close up to 900 shops in a move that would affect up to 5,000 jobs. It gave the revised figures on Thursday, which are slightly lower than its previous forecast of 1,000 closures and 6,000 redundancies.
B

Thank you Soccer Star. Great imput. Any shops that you know of closing? . Seems the midlands is being hit hard.. With the info we have collated.

[h=1]Up to 3,000 betting shops to close[/h]
William Hill's decision to close 700 shops could just be the beginning of a wave of High Street betting shop closures, an analyst has warned.

William Hill blamed the closures on the UK government's decision to reduce the maximum stake on fixed-odds betting terminals from £100 to £2.

The stakes were reduced to help vulnerable people and problem gamblers.

"I think we will definitely see more closures. GVC, which owns the Ladbrokes and Coral brand, have said they will close up to 1,000 stores," Mr Kelleher, who is an equity analyst at Goodbody Stockbrokers, told the Today programme.

"You are also likely to see stores close elsewhere in the market from independents and potentially from Betfred so I think all told we'll probably see over 2,000 to 3,000 shops close in the UK, which is a significant chunk of the 8,400 shops that currently reside in the UK."


"The £2 stake is the main issue behind those closures to be honest," he said.

Although gambling machines are a controversial issue, he adds that "there is an economic impact here" with more than 50,000 people employed in retail betting in the UK.

"You could say that retail betting is a key support for the UK horse-racing industry, which accounts for [the employment of] about 100,000 people in the UK," Mr Kelleher said. [h=2]'Enormous problems'[/h]
Business Minister Jake Berry told the Today programme that he was "sorry for all the people who work in William Hill who'll be worried about their jobs", but he said fixed odds betting terminals "have been described as the crack cocaine of gambling".

"I think we've done the right thing," he said. "Those fixed odds betting terminals were causing enormous problems for some of the poorest and most vulnerable in our society."

He added that fewer betting shops would make for a more diverse High Street.

"They can't all be hot food takeaways, charity shops, and bookmakers. We want to see a diverse and vibrant High Street." 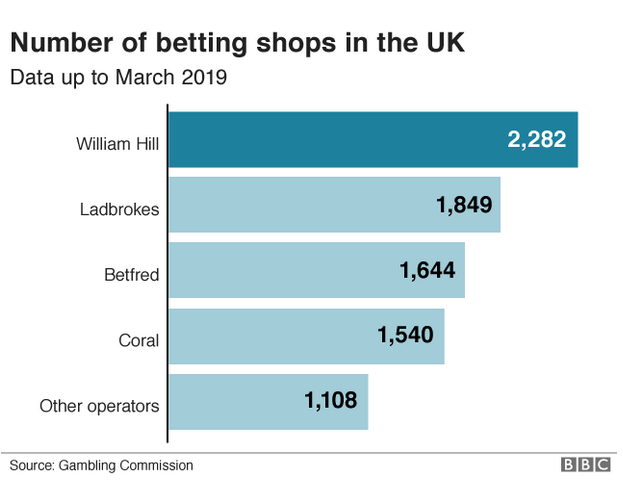 It was confirmed earlier this month it was pulling the plug on roughly one-third of its betting shops after the government cut the maximum stake permitted on fixed-odds terminals, with 4,500 at risk as a result. The Government cut the maximum stake allowed to £2 in April after complaints that the machines, which had previously let gamblers bet up to £100 every 20 seconds, were highly addictive and allowed players to rack up huge losses. The company has blamed the dramatic drop in revenue for its decision, with the closures meaning units currently occupied by William Hill betting shops will be vacant.

However, analysis undertaken by HARNESS Property Intelligence indicated the development could actually herald a new era.

A spokesman explained: “The data from HARNESS, which examined approximately 4,000 betting shops in England and Wales between 2010 and 2017, found that just 132 of these were closed and re-opened under a new use class.

Over a third (47) and the majority of these were re-opened as shops, suggesting that the significant closure of 700 betting stores from William Hill could pave the way for retailers to begin occupying the high street again.

“The logic here is that the last seven years have proven that when betting shops have closed, their replacement has overwhelmingly been a new shop/high street retailer or whatever term suits - with over one-third being re-opened as a shop, rather than the likes of cafes or restaurants for example.
“Given that 700 (compared to 132 in the last seven years) will be closing in due course, the evidence suggests that many of these will give way to new shops.
“Further to that it’s widely believed that William Hill’s announcement, heavily driven by the recent changes to gambling laws, will be the catalyst for a wave of betting shop closures – thus providing further opportunities.”
Ben Mein, HARNESS’s CEO, told Express.co.uk: “The announcement represents a significant change in the overall presence of high street betting providers.
“Plans to enable increased high street diversity have been on the agenda for what feels like years now but it’s the introduction of the new gambling laws which look set to have the most profound impact in this sense.
It will be interesting to see how the situation plays out in terms of replacing those stores but our data suggests that retailers, cafes and restaurants look set to receive the biggest boost.

“Some may also argue that the case for extending permitted development rights to incorporate other commercial uses has been given a new lease of life.”

A statement issued by William Hill on July 4 directly referred to the decision to cut the maximum stake for fixed-odds machines.

A spokesman said: “Since then the company has seen a significant fall in gaming machine revenues, in line with the guidance given when the Government’s decision was announced in May 2018.
You must log in or register to reply here.
Share:
Facebook Twitter Reddit Pinterest Tumblr WhatsApp Email Share Link
Find a Sportsbook
Rating Guide
Best Sportsbooks
Best For New Bettors
Best For Live Betting
Best For Bitcoin
Best For Professionals
Free Sports Picks by League