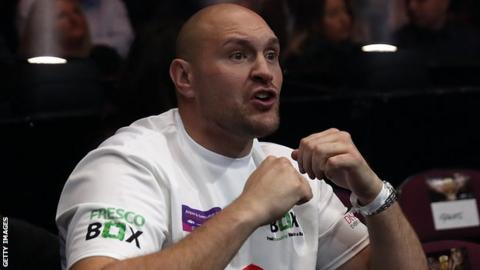 Former heavyweight champion Tyson Fury will return to boxing on 9 June against an unnamed opponent in Manchester - his first fight since 2015.

Fury, 29, has not fought since claiming the IBF, WBA and WBO world titles from Wladimir Klitschko in November 2015.

He was suspended in 2016 amid "anti-doping and medical issues" and accepted a backdated two-year ban in December.

However, he had his licence reinstated earlier this year and has now signed with promoter Frank Warren.

Fury first fought as a professional in December 2008 and has won all 25 of his pro bouts, but has been out of action for more than two years.

After beating Joseph Parker to win the WBO title on 31 March, Joshua said: "I want Wilder. Or Fury. Get him [Wilder] in the ring and I'll knock him spark out."

The WBA has since ordered Joshua to begin negotiations with Russia's mandatory challenger Alexander Povetkin.