Pacquiao (42y.o) lost his throne without fighting as the World Boxing Association (WBA) decided to strip the senator's super welterweight title due to inactivity on January 29, 2021, while Errol Spence Jr. (31y.o) is currently a unified welterweight world champion, having held the IBF title since 2017 and the WBC title since 2019. 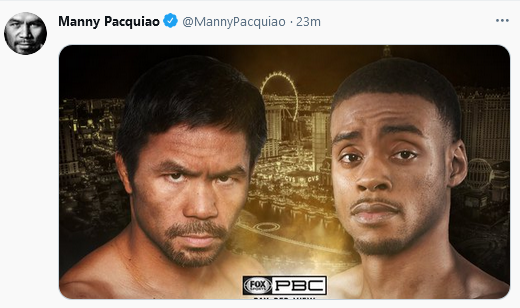 "Eight-division champion Manny Pacquiao has been slapped with a lawsuit seeking to recoup $3,300,000 and requesting an injunction to stop his next fight against WBC and IBF world welterweight champion Errol Spence Jr. on August 21 at the T-Mobile Arena in Las Vegas, USA.

According to a report by The Athletic, Paradigm Sports CEO Auddie Attar was amid negotiations for Pacquiao to fight Mikey Garcia but was veered away by the Filipino boxing icon’s associates Sean Gibbons and Winchell Campos to instead fight Spence."

“In addition to the millions of dollars in straightforward economic loss that Paradigm stands to suffer, the damage to its reputation resulting from Pacquiao’s breaches is incalculable,” Paradigm lawyer Judd Burstein wrote in the lawsuit.


“Just when Paradigm was at the cusp of establishing itself as a major player in professional boxing, Pacquiao has left its reputation as a boxing representative in tatters.”

The lawsuit also alleges that Pacquiao is under no obligation to compete under Al Haymon’s Premier Boxing Champions unless he is fighting Floyd Mayweather who defeated him via unanimous decision in 2015.

“Pacquiao’s breaches of the agreement, therefore, entitle Paradigm to monetary damages (and) costs associated with this proceeding, including but not limited to attorneys’ fees and … injunctive relief,” Burstein wrote.

Pacquiao attorney Dale Kinsella issued a statement in response to the lawsuit calling it "frivolous" and threatening to assert their own claims against the sports management group.

“The complaint filed by Paradigm Sports in California state court on Friday is a frivolous effort to interfere with Manny Pacquiao’s upcoming mega fight, and it can and will fail for numerous reasons," the statement said.

"Moreover, had Manny Pacquiao known that Paradigm Sports appears to have had no intention of fulfilling its contractual obligations, he never would have entered into any relationship with them. Should this matter actually proceed beyond Friday’s filing in a court of law, Mr. Pacquiao will vigorously defend this action, assert his own claims against Paradigm Sports, and seek to recover his attorney’s fees as well.”

The California-based agency and Pacquiao partnered in February 2020 and pursued a four-fight deal with streaming service DAZN, two of which were supposed to take place in Saudi Arabia.

Attar had previously expressed plans to put together a fight between Pacquiao and Conor McGregor, who is also signed to their group.

In February, Paradigm also issued a statement regarding people they called "shady characters" trying to involve themselves in Pacquiao's business dealings without the management group's authorization.

This guy just too old now but has a big following

He should retire from boxing. Focused on being a Senator if that's what he really wants.
Last edited: Jun 29, 2021

Boxing is a joke sport now.

Manny just treating it as it is. He has been playing them all for fools and counting the money for years already.

If you want to be entertained, just watch boxing.

Lately, Pacquiao is also making political noise against President Duterte. I think he also plans to run for President next year. What a big joke!

Pacquiao will be Pres

Pence is out due to eye injury.