Japan's last remaining sumo champion is retiring after the worst run for an elite wrestler in several decades.
A tearful Kisenosato Yutaka told a news conference he felt he had done "everything I could" but was forced to retire due to ongoing injury problems.
In 2017, the 32-year-old became the first Japanese-born wrestler in almost two decades to reach the rank of grand champion, known in Japanese as "yokozuna".
He has been hampered by injuries for almost two years but said he had wanted to continue competing for the sake of his loyal fan base.
"I was supported by so many people... I have nothing but gratitude," he told reporters on Wednesday.

"I was gradually recovering, but I was unable to wrestle in my own style," he added.

His retirement from the sport leaves just two remaining wrestlers at the elite level, Hakuho Sho and Kakuryu Rikisaburo, both of whom are from Mongolia.

The sport has been hit by falling numbers of Japanese competitors in recent years, in part because of the demanding lifestyle it requires as well as the rising popularity of sports such as football.

Young sumo hopefuls train in tightly-knit "stables" - eating, sleeping and practising together and are sometimes subjected to harsh treatment in the belief that it will toughen them up.

In 2007, one trainee died after he was allegedly beaten by his master and three other wrestlers after he attempted to flee his stable.

The sport has seen a string of scandals in recent years, including allegations of abuse, drug-taking and sexism.

Last year Harumafuji Kahei, a Mongolian yokozuna, resigned weeks after he was accused of assaulting a fellow wrestler.

Anew generation of female wrestlers are fighting to overturn ancient traditions around the sport which decree that only men can compete and women are seen as 'unclean'.

Kisenosato, who will be adopting the name of Araiso as a sumo elder, is expected to become a coach to budding wrestlers hoping for success.

His decision to retire comes after he suffered eight successive losses, the worst run for a grand champion since the current competition format began in 1949.

The champion made his professional debut in 2002, when he was just 16, and reached Japan's top division, Makuuchi, at the age of 18.


His elevation to the elite rank, which requires a tournament victory, did not come until 2017. 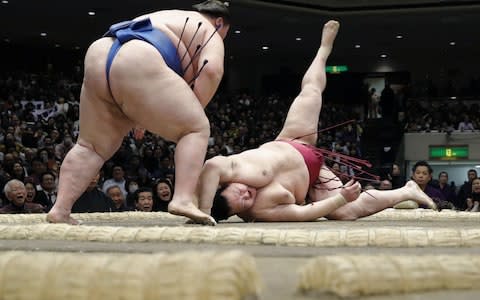 The sport is struggling to recruit home-born talent in Japan Credit: B434

He went on to win his first tournament as a yokozuna in 2018, but ever since his progress has been marred by a chest injury.

The injury prevented him from playing in eight straight tournaments, the worst record of any grand champion.

He returned to the elite level last September but a string of eight losses has led to him to withdraw from professional sumo wrestling.

"I was delighted when he became yokozuna but when you see him closely, you can tell that he was struggling a lot. These two years went like a flash," his stable master Tagonoura Oyakata said yesterday.

"He made a big decision. I can tell straight away by looking at his face that there were many thoughts on his mind.