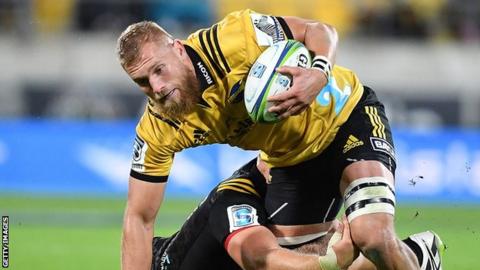 Hurricanes captain Brad Shields looks set to tour South Africa with England in June after handing in a formal request to the New Zealand Rugby Union.

New Zealand-born Shields, who qualifies for England through his parents, will join Wasps later this year.

England head coach Eddie Jones sees the flanker as part of his plans going through to next year's World Cup.

But the New Zealand Rugby Union (NZRU) says it will make the final decision on 27-year-old Shields' availability.

"He's contracted to New Zealand until the end of Super Rugby [in August]."

Too much of this switching countries stuff.

Half the Australian and New Zealand players have some sort of UK heritage. But it doesn't go the other way.

yes that trend began years ago and anyone who can prove they have bloodlines from almost anywhere can play for that team. Shoud be a 2 way street.
You must log in or register to reply here.
Share:
Facebook Twitter Reddit Pinterest Tumblr WhatsApp Email Share Link
BMR Baller Program
Become a BMR Baller
BMR Baller Leaderboard
Your Baller Coin History
Find a Sportsbook
Betting Sites
Top Online Sportsbooks
Best For Offshore
Best For Bitcoin
How We Rate
USA Sports Betting
Free Sports Picks by League