NBA
Warriors vs. Mavericks Picks and Prediction for November 29: Sticking With the Under
by Jason Lake
NBA
Clippers vs. Trail Blazers Betting Preview for Tuesday: Can Shorthanded LA Earn Road Win vs. Portland?
by Jason Radowitz
NBA
Today’s Best NBA Player Props Bets: Why Jokic has a Great Matchup Tonight
by Spread Astaire

NBA Daily Picks: Can Timberwolves Get Back to Over .500 vs. Wizards?

NBA Player Props Best Bets for November 26: All Luka Everything

NBA Daily Picks for Wednesday: Timberwolves Are On Fire Lately!

NBA Player Props for November 21: Why Myles Turner Will Have a Magical Night

Nuggets vs. Mavericks Best Bets for Sunday: Classic Lean On the Under With the Dog 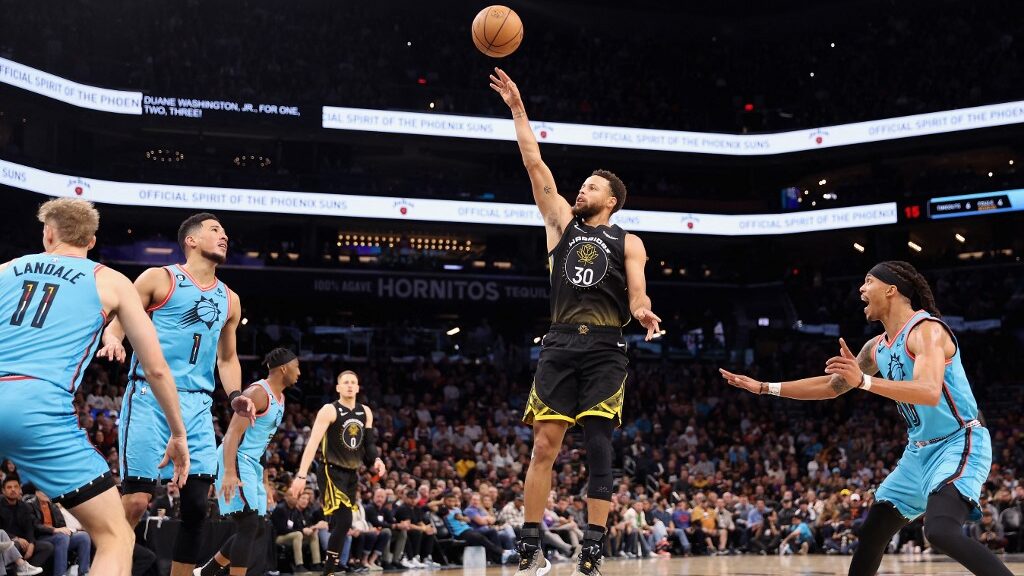 NBA Daily Picks: Will the Knicks Cover Against the Warriors on the Road?

Nets vs. Trail Blazers Picks and Prediction: Will Brooklyn Be Embarrassed Again?

Clippers vs. Mavericks Picks and Prediction: Can Luka Doncic Carry Dallas at Home? 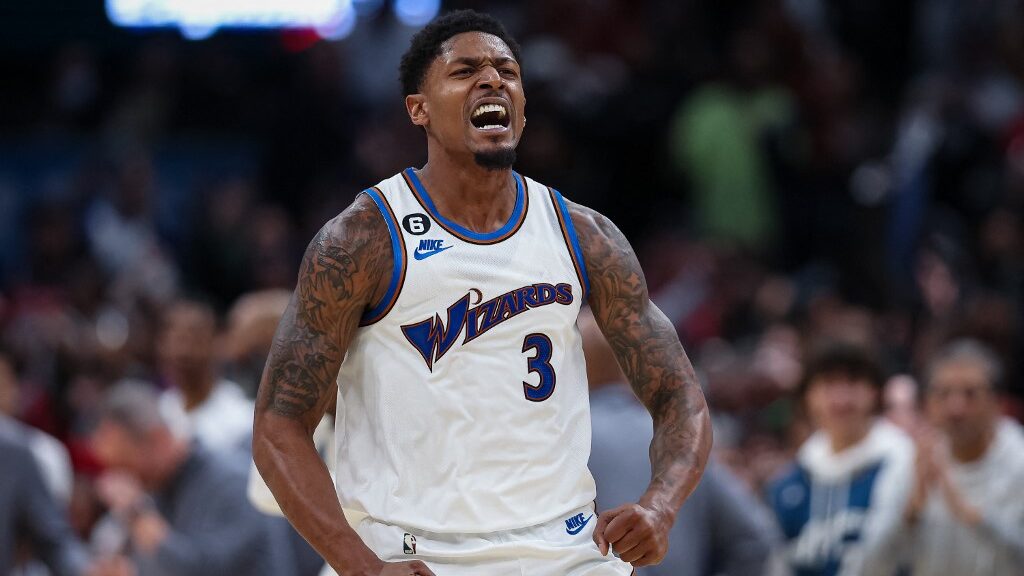 NBA Parlay for Wednesday’s Slate at (+165): Wizards Looking Dangerous With Beal Back

Throughout the NBA season, there is no better site than Bookmakers Review if you want the lowdown on each and every game on that day’s slate of games. Our cadre of expert NBA handicappers provides detailed analysis of the matchups, injury reports, and NBA predictions as to which team will cover the spread and make their readers money.

Unlike other sites, BMR does not charge for these insights because free NBA picks mean exactly that – free NBA picks. There are many sites on the internet that profess to have guaranteed NBA picks and will charge their subscribers through the roof for a service that, put simply, cannot be guaranteed despite their marketing schemes to the contrary.

No, here at Bookmakers Review, we understand that no one has a crystal ball but educated, informed, and knowledgeable opinions are a bettor’s best chance at cashing winners and making money throughout a basketball season.

BMR’s free NBA picks for tonight, and every night, are culled from seasoned handicappers who know the ins and outs of the trade and understand that value can come from the favorite or the underdog. The NBA picks of the day that you will read here at BMR are always NBA picks ATS (Against The Spread).

You see, anyone can predict that a 15-point favorite will win the game but the point spread levels the playing field which is where our team of expert NBA handicappers comes into play. Value is the name of the game and the basketball picks that are printed on the pages of BMR take that heavily into consideration.

Unlike many other sites, Bookmakers Review is not here to sell you anything. Our daily library of NBA picks is free to all and if you want to review the NBA picks in our archives, you are welcome to do so. Remember, the handicappers at BMR deliver their NBA picks with complete transparency and every one of them is available to view before, during, and long after the game is over.

Here at BMR, we don’t run, we don’t hide, and we don’t always win our NBA picks but what we are known for is providing insightful, thoughtful, and informed NBA predictions night after night after night. NBA consensus picks can also be found on our pages and whenever you want NBA today games, we are the place for you to turn – free of charge!

If you are new to betting hoops then don’t worry, we’ve got you covered. Below we will explain some of the basics and also make you aware that for the more sophisticated bettors out there we have tools such as arbitrage calculators, parlay calculators, and odds converters to name just a few. Okay, let’s talk about point spreads!

During the 2021 regular season, the Philadelphia 76ers owned one of the best records in the league while the Houston Rockets plummeted to the bottom of the Western Conference without the services of James Harden.

On February 17th, these teams met in Philadelphia but the line was not as high as you might expect because Joel Embiid was entering the game with back soreness while Ben Simmons, one of the 76ers superstars, was held out of the game due to illness.

The point spread was Philadelphia -8 ½ which simply means, the 76ers needed to win by nine points or more to “cover” the spread. In other words, because this is a mismatch, the Rockets got an 8 ½ point head start so when the game ended in a 118-113 Philadelphia victory, all those who included Houston in their NBA picks won their wagers while those who bet the favored 76ers lost their bets because they only won the game by five points.

A less popular way to make your NBA picks is using the moneyline. If we use the example above, we can bet which team will win the game without using the point spread. Okay, so we know everyone would bet the 76ers if all things were equal.

But alas, they are not because the bookies need to level the playing field and how they do this is by making it much more expensive to bet Philadelphia while handsomely rewarding those brave enough to bet the Rockets to win outright.

Finally, we often see many of our handicappers include totals, commonly known as the over/under in the sports betting vernacular, in their free NBA picks. A total is simply a number put out by the bookmakers for their customers to bet over or under the combined points scored when the game is finished, including overtime(s) if there is one.

If we use the above example with the Houston vs. Philadelphia game on February 17th, 2021 we see that many of the best online sportsbooks closed with a total of 227 on this game. The final score, as previously stated, was 118-113, and if we add those two numbers together, we get the sum of 231 which is greater than the 227 total set by the books. That means all of those who included over 227 in their NBA picks would have won while those who wagered under would have lost.

Our expert NBA handicappers don’t only offer NBA picks against the spread, totals, and moneylines as flat wagers but will, from time to time, include a parlay. Simply put, a parlay is like a sandwich where each bet fits between the bread like a slice of salami, cheese, mustard, and how ever many other ingredients you want to include. The more ingredients (individual bets) the bigger the sandwich – or in this case, the payout.

So, let’s assume you include in your NBA picks, Boston -4 in one game and Cleveland +7 in another. Those are two distinct bets. If you were to bet each one for $100, that would give you three possible outcomes (assuming there were no ties, aka pushes).

Scenario 1: Both teams cover the spread which means you would win $200.

Scenario 3: Both teams fail to cover the spread which means you would lose $220

However, if you bet a parlay that means you are including both bets under the umbrella of a parlay bet. Here are the rules of a parlay.

– Both teams must cover for the parlay to pay off.

– If one team covers and the other fails to cover the bettor will lose $100 versus -$10 if they were bet individually.

– If both teams fail to cover the parlay will still lose only $100 versus -$220 if they were bet individually.

– A push and a push will be no action and the initial wager is returned to the bettor.

As you can see, there are pros and cons to parlays but the general consensus is to stick to making flat bets and following the advice of our expert NBA cappers.

There is a wealth of knowledge to be gained at Bookmaker Review’s NBA Basketball Picks site but it is not limited solely to our NBA expert picks. We should point out that BMR’s NBA Forum is also an opportunity for basketball fans and bettors to discuss the latest topics, breaking news, and of course, offer their NBA predictions for that evening’s slate of games. Opinions on a range of topics are shared in our community and we welcome you to be part of it.

All you need to do is sign up and you’re in! There is no charge and you might be surprised at how much response you receive if you share a basketball pick or two! Everyone has an opinion and BMR wants yours, so grab a jersey and get into the game.

You should also know that the action doesn’t stop when the curtain closes on the regular season. No way, no how, because the postseason is when the action really ramps up as our handicappers not only provide detailed analysis on the individual playoff games but the series as well. You will even read their NBA Finals predictions which can make you plenty of money if you bet the winning team before the playoffs commence!

As always here at Bookmakers Review, there is no charge to sign up, so become a member of our community, enjoy the wealth of knowledge provided by the cappers we employ to deliver their free NBA picks, and hopefully, you will share a basketball pick yourself. But even if you choose only to lurk on the forums, it is completely fine because we welcome everyone.

Don’t miss a moment of the action because when the season is over, and a champion is crowned, we keep you up to date with the NBA Draft, offseason signings, injury updates, and so much more. Our NBA handicappers don’t stop when the season does and neither does the activity in our NBA forum. BMR delivers NBA news throughout the year and if you’re a true NBA fan, you wouldn’t have it any other way!

How Can I Stay Updated with BMR’s Betting Predictions?

The best way to stay updated with our free betting tips is to visit the site on a regular basis. Bookmark it and check in each day for a range of new betting advice covering all the most exciting on the sporting calendar. You can also find us on YouTube, where we deliver daily video content. Search for “Bookmakers Review” and you will be presented with a wealth of videos to choose from. You can press the bell icon to subscribe, and you will then receive reminders when are about to go on air. The videos are hosted by our in-house team and feature pro handicappers and sports wagering experts as guests. You can also follow us on Twitter @BMRReviews, where we provide links to our latest content.