TempoBet: this company is scam and stole me

This site is dishonest and does not pay. Sent messages of makerting about offers and promotions, including by email, to players and do not honor. They are dishonest and do not pay. The support service plays with you, treats you like an idiot. In summary: it is a site that only wants to receive deposits and does not pay anyone the promotions offered

The site sent an email to all users, promising a reload promotion, for all deposits made between 20 and 26 of February, up to 500 TL (80usd, 75eur) 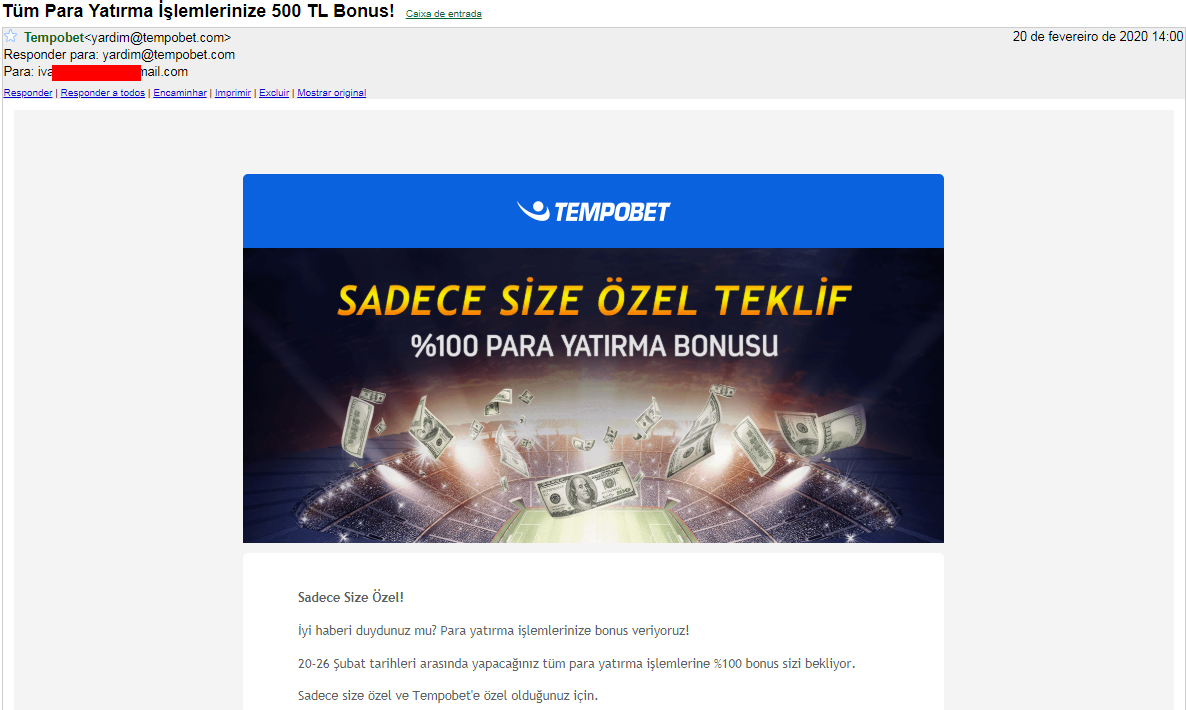 Below is a picture of the email they sent to users

Day 21 I accessed my account. The promotion was there, needing a deposit to be activated, with the status: “No deposit made during the promotion period”

I made my deposit, on day 21. Then, the status changed to "You can apply for the bonus now". The “REQUEST” icon appeared. I clicked and immediately the bonus amount was added to my balance and I was able to play with it

I fulfilled the rollover, completely

As the promotion was for all deposits between the 20th and the 26th, I thought about making a new deposit, to earn the bonus again

I went to the “PROMOTIONS” section, and there was the promotion offer again. However, with the status: "Only one bonus allowed during a 72-hour break". Soon, I couldn't participate again

I waited 3 days. On day 25 I accessed the PROMOTIONS section, the offer was still there and now the status was also as on day 21: “No deposit made during the promotion period”

Then, on the same day 25, I deposited 81.00, to win 80.00 bonus. After this deposit, status changed to "You can apply for the bonus now". The “REQUEST” icon appeared. I clicked, believing which a new bonus will to be added for me account

Now that the problem had occurred: the REQUEST icon did not work now. When I clicked on it, the page updated, but returned to the same page, with the same REQUEST icon, that is, the bonus amount was not credited as it always was

Below, the promotions screen, taken on February 25, when the system failed with the “Request” icon:

A clear and obvious technical problem, a website failure, a problem for the IT team to solve

Immediately, I contacted support. I explained what was going on. I informed them what the mistake was, for them to pass it on to the IT team to resolve. But that they would must to resolve quickly, because the next day (26) the promotion would end and leave all the PROMOTIONS page of my account, and the bonus "not requested by me" (due to website error, since the REQUEST icon did not work) would expire and disappear

I was told to try to activate by another browser. I tried, it didn't work. I was told to wait, that they would contact the responsible sector. I waited all day 26 and nothing, no reply by email or message on the account. All day 27 passed, and nothing. And all next days I was ignored

They could to have credited the 80.00 manually, very easy to solve

The worst thing is to enter the chat and explain all of this above, for some patetic members of support service who don't seem to be even 7 years old, after all they don't understand anything that is explained to them, or if they are made of donkeys and are really dishonest

I explained to about 5 different attendants and none of them knew anything about this promotion, on the contrary, they said it didn't exist. Such a thing is bullshit. Only Turkish support knows about the promotion, I try to talk to them and they send them to Portuguese support (because the Turkish translation is poorly done by the translation program)

It is a ridiculous, bad support, bordering full and complete amateurism. Total nonsense. They are unable to understand what they read. I explained by showing screenshots of the promotions screen when the error happened, with the REQUEST button active (the only thing needed to have a bonus amount credited to the balance is to deposit and click on this REQUEST icon, which did not work this time)

I said that they would do this and it was said and done: the 26th passed, the promotion disappeared from my account as unsolicited, expired, and when I enter the chat now they say that there was no promotion or that I already requested (yes, I requested the 21st, but the promotion was on all deposits in this period as long as within 72 hours between one and the other)

In resume: it is a dishonest company, made by dishonest thieves and with a support of idiots who behave like children of 7 years doing themselves who do not understand what the customer writes

I recommend that no one create an account in this crappy, amateur and dishonest company, and don't even put a penny in it, otherwise they will be stolen. They robbed me of failing to credit my 80.00 bonus, imagine if it was a great value money

That sounds like an unhappy experience, but I don't think we can do much about a tech issue not allowing you to claim a bonus.