[h=1]http://www.bbc.com/sport/snooker/43259720
World Championship qualifiers: Ng On Yee and Reanne Evans in the draw[/h] 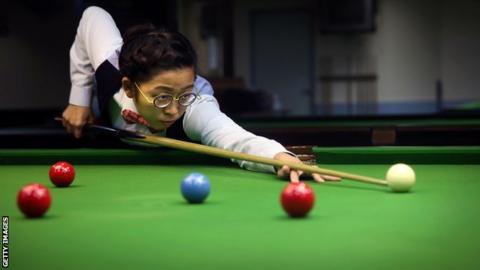 World women's champion Ng On Yee will face Matthew Selt in the first round of qualifying for the World Championship.

The legendary Jimmy White and former world champions Peter Ebdon, Graeme Dott and Ken Doherty are all in the 128-player draw.

The best-of-19 qualifiers run from 11 to 18 April at the English Institute of Sport in Sheffield.

Players have to progress through three rounds of matches to join the 16 seeds in the main draw, which takes place at the Crucible Theatre on 19 April.

The tournament begins on 21 April, live across BBC online, TV and radio.

World number 57 Selt said he cannot afford to "underestimate" Ng as "she is a talent and can really play".

He told BBC Sport: "I hope she gives me a tough game because it could set me up well through the rest of the qualifiers.

"I could have been handed a tougher draw, but I need to respect her.

good article...I played in university for few years..made some quid too

Snooker is a great parlour game anyone can enjoy.

Could not pay me enough to watch that dogshit