After playing 36 group games to eliminate eight teams, Euro 2020 is now at the business end of the tournament, with the knockout stage beginning Saturday.

The top half of the bracket looks loaded, with five teams that have legitimate title aspirations. Belgium's pre-tournament title odds were around +600, and they're now at +900 because of a round-of-16 match versus the reigning European champion (Portugal), then a possible quarterfinal against the best team so far in the tournament (Italy), then a likely semifinal against world champion France or Spain. That's as tough a title road as possible.

The other half of the bracket has three title contenders, plus a karma-fueled Denmark. Two of those contenders (England and Germany) meet on Tuesday, with Netherlands lurking with Denmark in the other quadrant. All that to say: the knockout stage is set for a memorable two weeks.

As always in tournament knockout games, remember that all bets are for 90 minutes plus stoppage time, unless otherwise indicated. Here are my best bets for the round of 16.

Team A is Italy, which outscored opponents 7-0 to sail into the knockout stage with nine points. Team B is mighty...Denmark? Yep, the Danes outshot each of their three opponents by double-digits, and that includes Belgium, which scored twice on six shots.

Five years ago, Wales scraped by Northern Ireland in this round, 1-0 on an own goal. This game will likely be similarly low-scoring (under 2.5 is -200), and I have far more faith in Denmark to create good opportunities.

This game is also in Amsterdam, which has banned Welsh fans for COVID-related reasons, while allowing Danish fans who meet several requirements. Besides, do you want to bet against Denmark, the feel-good story of the tournament? I sure don't.

The Dutch looked as good as any team in the group stage, and Czech Republic may have been the worst team to advance.

Excluding penalties, Netherlands leads the tournament with 7.6 expected goals and is second with an expected goal difference of +5.2. The Dutch created the third-best shots in the group stage (0.17 xG/shot) and conceded the fourth-worst shots (0.08 xG/shot).

Meanwhile, Czech Republic had the fewest expected goals (2.2 excluding penalties) of any team that advanced, and the Czechs had only two big scoring chances (0.3 xG or more) in three games.

The Dutch have firepower, as Memphis Depay and Gigi Wijnaldum combined for 20 shots and 3.7 expected goals during group play. Czech Republic does not, assuming Patrik Schick isn't scoring from midfield again. This one falls firmly into the don't-overthink-it category.

Belgium-Portugal over 2.5 goals (+105) Portugal scored twice in each group game, thanks in part to three Cristiano Ronaldo penalties, and conceded 3.7 expected goals (plus two own goals) to Germany and France.

Belgium obviously has the offensive prowess, particularly if Kevin De Bruyne returns to the starting lineup, and Roberto Martinez's side should be able to attack with wingbacks Thorgan Hazard and Thomas Meunier, much like Germany did in hanging four goals on Portugal.

Regardless of which team scores first, this game should open up. If Belgium strikes first, Portugal has to take the initiative, which opens up space for Belgium on the counter. If the Portuguese sneak a goal first, Belgium will press fiercely for a goal as in the Denmark game, and Portugal will thrive on the break. Either way plays into the over.

Even before shellacking Slovakia 5-0 in the group finale, Spain was having a good attacking tournament (minus the all-important finishing part). Excluding penalties, Spain had 4.8 expected goals against Sweden and Poland, but only one goal to show for it.

Spain got two own goals and a missed penalty against Slovakia, and still put up three goals and 2.7 expected goals from the run of play. Spain's 7.5 expected goals in the group stage narrowly trailed only Netherlands for most through three games.

That's a long way of saying Spain is fine. Croatia may not be, after taking 30 shots and generating a total of 2.3 expected goals, sixth-fewest in the group stage and second-fewest of any team to make the knockout round.

Croatia won't have much of the ball, since Spain had 75 percent possession in the group stage, 10 points higher than any other team. Spain had 34 more shots than its first three opponents, and I expect more of the same here. 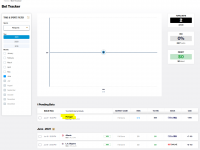 Try tracking big market moves,and opposing them about half an hour before the game if you think they've gone too far.Like the gamble on France to beat Portugal in their group match.
Last edited: Jun 28, 2021